Had a poem in mind–

Real life with a theme,

But I just couldn’t

Type it up for you

Tonight. I’ve had too

Many at this titty bar

Tonight to type it up

For you right. I feel that

Soft music inside me,

As I drink these pale

Ales and do dance after

Dance with a baby-faced

Sees me as a creepy-assed

Cracker even though I

That if God was good

On a five foot Bratz doll

Me feel alright for now even

Though my readers never

Buy my novel and I’m

Doomed to hell with no

As you’ll ever get

From a guy with

After work on the

The way home to

Who didn’t do much

To raise my Christmas

Cheer, I spied a doll-faced

Alone at the bar, so after

By a few of the others, I

Went up to the brunette

And asked for a dance.

And she was good

Enough to raise the

In my shorts. She also

Claimed to have saved

A kitten in traffic, which

Raised her stock in my

Book too. Well, as I paid

Out the going rate there,

(I’d been there only a week

Before) plus a cheery tip,

She held up the bills and

The price. She said only a little

While ago and added that all

All the girls there charge 20.

Well, I scrounged up the

Song before. But she had

Delivered the dances, and

I hadn’t asked about her

Price first. Of course, after-

Wards I learned that no one

Else there at the time charged

Hadn’t changed at all. I’m

Not mad though. This

Morn, as I approached

One of my makeshift

I emptied the bag of

Cat food, then I stuffed

Some fresh straw in the

Managed to do it all without

Getting caught. I know that

Karma and heaven are myths,

But seeing those kitties snug

In the shelter made me feel

Good. “The Kingdom of

Heaven is within,” as Mr.

Christmas said, and his

“Father’s house has many

Mansions,” too, and one of

Those mansions has a

Of homeless cats, while

Another has a lovely,

Raises the dead. The

Buy my book on Amazon: Mail-Order Annie by Fyodor Bukowski. 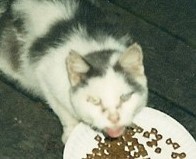 One of his eyes was

pale. He had a bad

snaggle tooth, and he

was one big cat.

Cat” because he lived

out of the dumpsters.

on her porch. Sometimes I’d

watch Alex head there with

What struck me most

was the way he’d let

the little ones eat first,

and the way he’d growl

low and mean if you tried

to get too close. Then the

lady told me that the

strays. She and I both already

had cats, so I used her trap

and took Alex and his two

pals to a no-kill shelter where

he tested positive for the cat-

version of AIDS. Luckily, there

was a big, exclusive room there

for cats with that. It was furnished

with a couch, litter boxes, and toys.

Volunteers came to pet the cats and

clean. Alex became a celebrity there.

He lived well for over ten years,

and when he finally grew too thin

and tired, and didn’t want to eat,

I walked into his room, held him,

and said, “Goodbye for now.”

is when “The Motorcycle Boy”

in RUMBLEFISH breaks into

the pet store at night to free

these fighting fish. While he’s

doing it, he mutters something

about the fish, how they won’t

need to fight, if they just can

make it to the river. Now the

the pet store is guarded by

this hard ass cop who’s had

good long time, so when the

“boy” is gunned down in the

street with that fish tank in

his arms, we get the idea

that he was ready for end

and even wanted it to go

of another good way to

there’s this guy who feeds

pissed because the only

others who seem to care

whose maternal urges have

been displaced onto hapless cats.

Now say this guy is mad about

more than just how society

regards cats, so when he goes

to feed them, or change the straw

in the makeshift shelter he’s built,

And say that one day (or night)

he feels that his light is spent, so

he really takes his time

pouring out the dry food and

laying the wet food over it, then

arranging the straw in the shelter

just right, until finally, some cow-faced

fool comes hoofing out of his castle of

commerce or over-mowed  back yard

those cats!” So then our cat-guy pulls his

revolver, aims it, and blows a big hole out

the back of cow face’s fat head.

Then our hero waits for the cops to

arrive, while his hands are shaking,

because this isn’t some movie directed

not as cool as The Motorcycle Boy, and

he knows what comes next; but still he

has no regrets. He’s even relieved, feels

he’s chosen his end well, even if only a

few can see it that way.

Check out his novel MAIL-ORDER ANNIE (A Story of Passion and Compassion).

if you can’t catch your tail–

I run in circles too

Click this to check out my IndieReader-Approved Novel. All proceeds go to taking care of rescue cats and homeless cats.

This is a text widget, which allows you to add text or HTML to your sidebar. You can use them to display text, links, images, HTML, or a combination of these. Edit them in the Widget section of the Customizer.